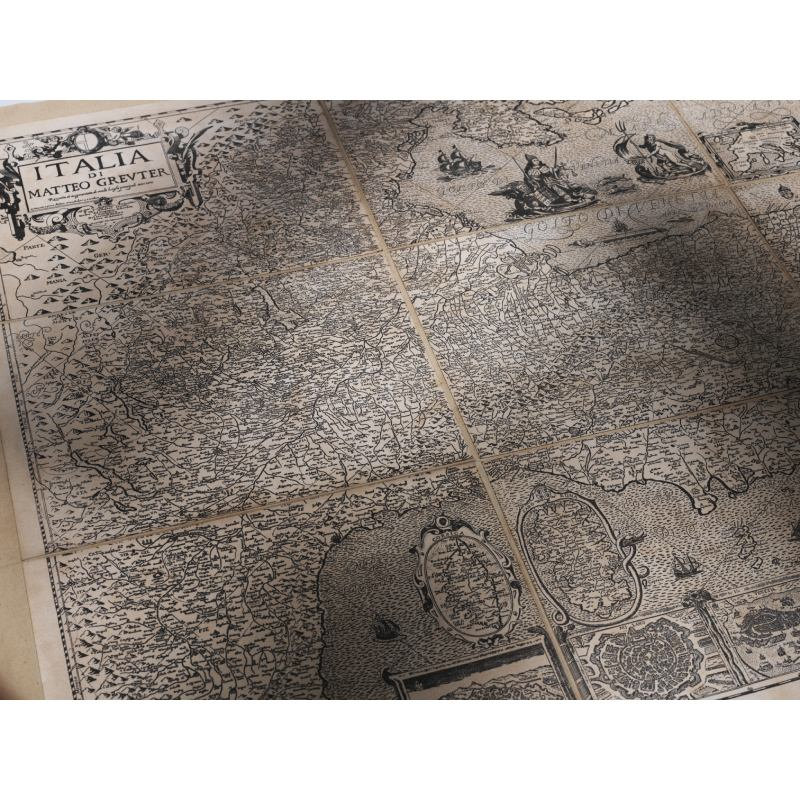 These canvases are born from our passion for cartography. Historical reproductions, handcrafted to create unique and effective furnishing elements. We have made reproductions of antique prints, wonderful perspective views of some historic Italian and European cities and ancient planispheres. These products are engraved using a hand press, and reproduced on pure cotton paper. The canvases are also entirely hand painted by our precious craftsmen who, with care and dedication, make each reproduction unique.

Matteo Greuter was born in Strasburg in 1556 and worked in Lyons, Avignon and Rome.He dis­tinguished himself by his extremely accurate and elegant technique; he engraved numerous religious and mythological objects. He is most famous for his beautiful 'map of Rome, (1608), and for this map of Italy done in 12 pages, the largest one ever published.There are three other versions of this map, all of which are quite rare. The first one was done in 1657 in Venice by Stefano Mozzo Scolari. The second one done in 1675 was printed in Bologna by Pietro Todeschi and the third one, done in 1695 in Rome by Domenico de Rossi, the printing company. The map depicts Italy in the year 1657, (Venetian version), and is quite large: 1.15 x 2.20 meters and the scale is 1: 540.000. It is composed of 12 pages mounted on canvas and the longi­tudes come from the islands of Capo Verde. The placenames are in Italian and it contains aliegorical figures from various regions and prospective maps of some cities. The three major islands, Sicily, Sardinia, Corsica, are arranged separately. A curious aspect of this map is how Greuter positioned Italy horizontally. His reason is explained in the scroll ornament on the map itself.

Considering the success of other productions on a large scale, like the large plani­sphere by De Wit, (1670, 1.83 x 1.25 meters), we used the same technique used in the seventeenth century to reproduce this beautiful map of Italy. The plates are fine­ly engraved and an old manual press is used. The image is transferred onto 100% cotton paper, as was made in antique paper mili already working when this work was produced for the first time. This large mural map, just like the originai, is mounted on 100% cotton canvas and is then put through a delicate ageing process using only natural substances.The watercoloring is done by experienced artists who keep in mind the centuries that have gone by in order to give the right composition and tonality to the colors so that the beauty of this map come out.

Italia di Matteo Greuter  is the object for scholarly studies and is undoubtedly one of the most splendid car­tographic works of its time. It has been reproduced in a limited number, one of which can be seen in the map collection of the Italian state, care of the library of the Geographical Military Institute in Florence which has recognized the map's value and historical importance.

Our canvases are printed with a hand press and are produced only to order. It takes about 7 days for black and white production and about 14 days for color production.

*Each canvas is available, with a price increase, also with watercolor coloring, always done by hand by our craftsmen.