A treasure chest of history, culture but also mystery, starting from the uncertain origins of the city. The name is probably of Etruscan origin but the legend says that Senio and Ascanio, sons of Remo, the brother of Romulus, founded it. The two would arrive in Tuscany after fleeing from Rome to seek shelter from the murderous intentions of their uncle.

The beating heart of the city is Piazza del Campo, with its famous shell shape that, thanks to the lines drawn on the pavement, makes the gaze converge towards Palazzo Pubblico and Torre Del Mangia, from whose summit you can enjoy a breathtaking view. The square, in addition to being the center of the city, hosts the famous Palio di Siena: the most important event that takes place every year in July and August and that has been going on continuously since 1633.

On the occasion of the Palio, the city is divided into 17 districts, each of which has its own coat of arms. The different districts compete through a spectacular horse race right inside Piazza del Campo. The Palio is a folkloric event particularly felt by Siena citizens and every year attracts many visitors from all over the world thanks to the charm of a historical tradition carried on with extreme passion even today.

Siena, however, is not only the Palio: among its beauties, the Cathedral, built in the thirteenth century, is one of the main examples of Romanesque-Gothic style in Italy. Monument of extraordinary beauty, stands imposing towards the sky; you must visit it with calm and silence to be able to appreciate every single wonderful detail. Its size and the delicate contrast between white and green marble leave anyone breathless. If the exterior is spectacular, the interior will leave you breathless: the church hosts a large number of works of art by some of the most famous Italian artists, including Donatello, Pisano and Michelangelo.

Do not miss a visit to the Civic Museum, located inside Palazzo Pubblico, which contains the famous "Allegory of good and bad government", a cycle of frescoes by Lorenzetti that represents the ideals that guided the government of Siena and that will leave every viewer breathless.

The view of Siena printed on canvas

Siena is one of the most extraordinary Italian cities: how could we not pay tribute to it? Zoffoli has reproduced on cotton paper the perspective view of Siena by Johann Friedrich Probst (1700).

In addition to the production of globes, in fact, our company dedicates itself also to the creation of ancient prints on canvas: they are faithful reproductions of perspective views of Italian and European cities, but also of planispheres and geographical maps. Our expert artisans with great care and attention carry out the printing process by a hand press that gives the products one of their main and unmistakable qualities: engraving. The use of separate pure cotton paper enriched the product, assembled on a canvas also in pure cotton. In canvases and globes, attention to detail is the hallmark of Zoffoli quality.

Let yourself enchant by a panorama meticulously reproduced: from the many medieval towers that recall the nearby San Gimignano to the rolling hills that surround the city, this canvas gives us a breathtaking panoramic view of 18th century Siena.

In the view, you could easily recognize the famous Piazza del Campo, theater of the prestigious Palio, and the imposing Cathedral that stands majestic upwards. All around a succession of roofs, towers, streets and monuments, surrounded by the imposing city walls beyond which expand the green hills typical of Tuscany landscape.

The view of Siena, like all our canvases, can be produced both in black and white and in color. The latter is handmade by our artists thanks to the use of watercolors. Every single canvas, therefore, is a unique production.

If you are looking for an elegant and refined piece of furniture, our perspective views of Italian cities are the perfect choice. Made with extreme attention to detail and mastery by our artists, they give a touch of class to your environments.

Do you want to discover which other Italian cities we have reproduced on canvas? Visit the dedicated page. 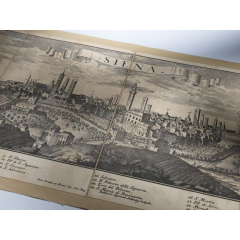