The world on a wall: Zoffoli planisphere

The planisphere is a map whose purpose is to provide a flat representation of the spherical surface of the Earth, using different types of projections.

The idea of maps is very ancient and comes from the need of man to represent the surrounding world. It is an object of remote origins: the first planisphere dates back to the sixth century B.C. and is attributed to Anaximander of Miletus. It was undoubtedly an essential aid in navigation practices, during which it was possible not to see land emerged for several weeks, making therefore good maps extremely necessary.

Over time, with the succession of discoveries in the geographical field, also the planispheres have undergone an inevitable evolution, especially from the second century A.D. and in particular with the geographer of Greek origin Claudius Ptolemy, who lived in Alexandria in Egypt. This scholar is responsible for the reconstruction currently known as the "Ptolemaic Planisphere", which represented the Mediterranean Sea, the Indian Ocean, the European territory and part of the Asian continent.

How new discoveries changed the way the world is represented

The great voyages of exploration through the oceans and the consequent discoveries of new continents deeply modified the maps, surpassing even the Ptolemaic vision. With the discovery of America, there was a radical change in the perception of the world and a consequent need for new means to represent it.

It was in the course of the '500 that the planispheres underwent profound innovations. The first map bearing the name "America" as an indication of the New World is dated 1507.

As explorations widened the boundaries of the world, cartography became even more an exact science.

The exploits of Colombo, Vespucci, Caboto, Magellan and many other explorers gave an extraordinary acceleration to geographical science. Starting from their discoveries, many cartographic workshops developed gradually in Europe, ready to create new maps or to update old ones, based on the more updated information.

Today the planisphere has not only a didactic role, but is also widely used as an ornament. To satisfy both purposes of this object, today’s cartographic production offers different types of planispheres: some more modern and updated and others more faithful reproductions of ancient maps, which combine aesthetics and cultural interest.

In our catalogue, we offer reproductions of ancient planispheres designed by the best geographical ateliers of the past centuries, on the wave of the explorers who have made history. Our passion for cartography has given rise to our own historical reproductions, handcrafted to create unique pieces of furniture. These products are engraved using a manual press and reproduced on pure cotton paper. 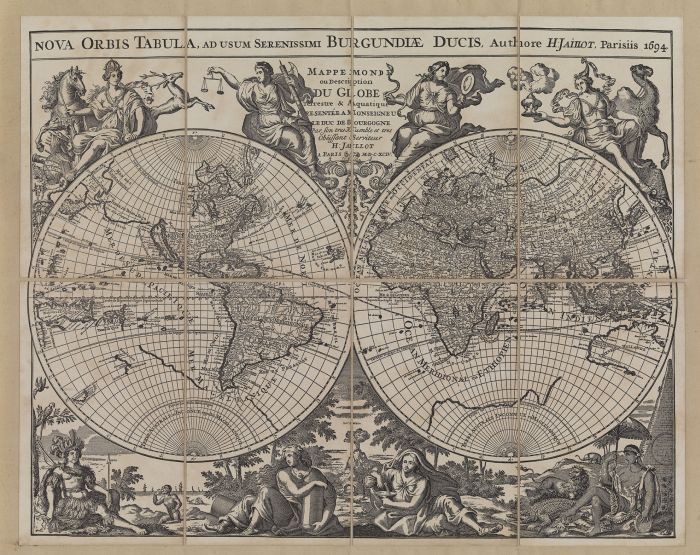 Printed in Paris in 1694, the Jaillot Planisphere strikes for the high number of details and the refinement of the illustration. The author is the famous French cartographer Hubert Jaillot, who distinguished himself not so much for an abundant cartographic production, but for the refinement and elegance of his few works.

This map, dedicated to the Duke of Burgundy, is a good example of this. It was probably to pay homage to this important figure that Jaillot created in such a refined way the allegorical figures that surround the lands and oceans outlined in this work.

To do justice to this work, the reproduction that we propose on this page are created according to the same printing techniques used in the production of the original. The design was realized by means of a manual press that, through plates finely engraved by artisans, imprints the figures on pure cotton paper. Even in this case the technique of the time is respected: it is in fact many smaller sheets placed on a background canvas, making it possible to fold the canvas into smaller parts. This device was adopted to solve the problems of moving works that often turned out to be of big dimensions and that therefore in other way they would have risked to be damaged.

Although it has not been possible to identify precisely the author of this work, the Planisphaerium Terrestre can still be considered as a fundamental work in the history of cartography.

It is a representation of the world dating back to the eighteenth century, which testifies to the evolution of the navigation routes of the great explorers: California is still represented as an island; you can see here and there islands often non-existent in the North Atlantic, while Japan is drawn with a very peculiar shape. On the other hand, however, we can also see the progress of the geographical sciences with the representation of part of the Australian coast, part of New Zealand and with the routes traced by famous explorers such as Magellan and Tasman.

Even in this case the technique of realization of the reproduction that we propose remains faithful to those employed by the printers of the eighteenth century. The images are printed by a hand press on 100% pure cotton paper: it is a paper that was found at an ancient paper mill that was already in business when this planisphere was made for the first time. Also for this planisphere are used plant-based substances to carry out the aging process and make the planisphere as similar as possible to the original.

Considering the particular methods followed, each product is unique, thanks to the differences that inevitably arise during printing: this increases the peculiarity of each reproduction, which, in addition to being an object of great cultural value, can become an interesting object of furniture and decoration for anyone looking for details that do not go unnoticed.