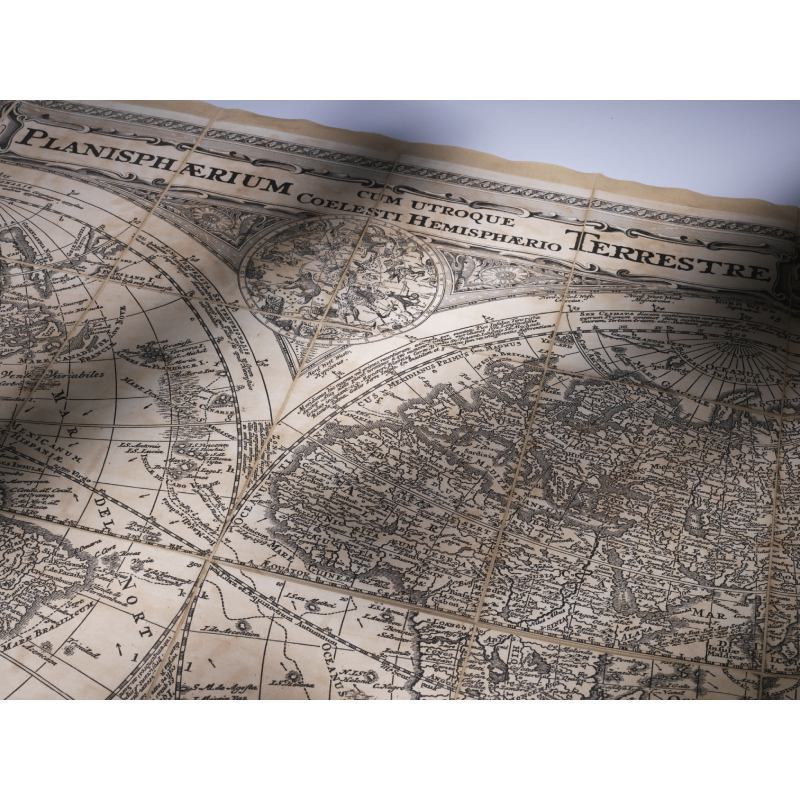 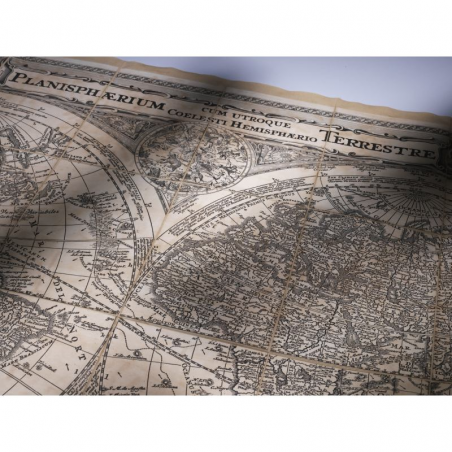 These canvases are born from our passion for cartography. Historical reproductions, handcrafted to create unique and effective furnishing elements. We have made reproductions of antique prints, wonderful perspective views of some historic Italian and European cities and ancient planispheres. These products are engraved using a hand press, and reproduced on pure cotton paper. The colour version is entirely hand painted by our precious craftsmen who, with care and dedication, make each reproduction unique

“They say that some people don’t find maps interesting. It seems impossible to me.” wrote Robert Louis Stevenson. Of course, as the creator of the map in Treasure Island, Stevenson was practically a professional cartographer and he certainly knew what he was talking about. It is decidedly perverse not to appreciate the elegance, ingenuity and extravagance of antique maps. E. C. Bentley’s famous saying that geography is about maps and biography is about people is only partly true, because maps also tell us a lot about people.

One of the purposes of antique maps was to document man’s impact on the territory and, given the fact that they date at least as far back as the Babylonian era and cover all the earth’s surface, we can say that antique maps are as vast as civilization, anticipating even the use of writing. At the beginning they were schematic representations of evident planimetric features which served to find again a previously traveled land or sea route, based on rudimentary elements of length and direction.

They gradually became increasingly expressive descriptions and, as man’s horizons, knowledge and needs expanded, thanks to surer and more dependable methods of measuring and drawing they began to involve increasingly larger areas and ultimately all the parts of the earth’s surface, investigating the shape and size of the earth itself and studying the laws of the Universe, to which many terrestrial phenomena seemed linked. At the same time, drawing techniques also were becoming more elaborate and more sophisticated, resulting in the creation of maps of the world which can be rightly considered milestones of the science of cartography.

The Planisphere offered here rightfully belongs among these works, both for the information it contains and for the finesse of its drawing and the elegance of its forms. Obviously, a map of the world of such refined beauty necessarily had to be made and intended with recourse to the same techniques and utilizing the same materials that were used at the time.

This map was made with the xylographic technique, the oldest expression of graphic art, using exclusively a manual press and plates engraved with great skill and precision. Each work is therefore an original which differs from the others in small but important ways. The drawing was transferred onto a support of 100% pure cotton of the correct weight,found at an old paper mill which was already functioning when these works first saw the light. In order to recreate the atmosphere and mood evoked by works of art of the past, the paper was aged by hand, one sheed at a time, by a process which uses strictly organic substances.

Next, the paper is cut and anchored to a canvas backing, this too made of pure cotton, which is carefully and skillfully aged using the same technique as that used for the paper support. The primary objective of this entire operation is the creation of a product that, through the use of certain materials and techniques, makes it possible to restore the beauty of the original and regain its historical-cultural value.

The last - but no less important - step of the procedure is coloring the work. This is done with watercolors by artists specialized in their use, who know how to give the paper that polychrome appearance with its undoubted scenic effect. Naturally, the colors to be used are chosen in consideration of the original colors and also of the changes which the watercolors of the original artists underwent over the centuries, obtaining a result that can give the feeling of an enjoyable return to a long ago past.

Our canvases are printed with a hand press and are produced only to order. It takes about 7 days for black and white production and about 14 days for color production.

*Each canvas is available, with a price increase, also with watercolor coloring, always done by hand by our craftsmen.